I have been trying in vain to get a carpenter to make broads to mount my little paintings on. For months I have been trying. Yesterday I came to the undeniable conclusion that I would have to make like the Little Red Hen and: Do it myself! Being reunited with my old work and going to my folks home brought it all in to focus. We do it our self's, that is what we do.

I am making the boards into sculptural objects....like the globes. Paintings on sculpture. Paintings that are objects. Drawings that are sculpture (Wire drawings). Somehow it is all coming together....but I have miles to go before I rest.

Onward...and a happy weekend!
No comments:

a place for everything... 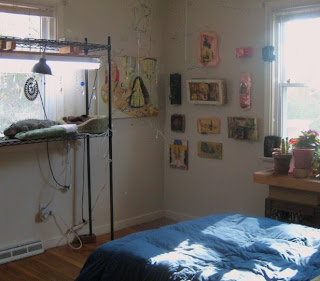 Truman has more things to look at today. I am folding the old art into our new life. A lot of it landed in Truman's room. 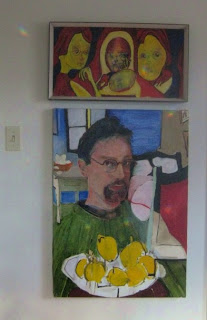 When I was a kid I had the Three phases of motherhood painting in my room. TBIH noted it was a rather dark painting for a kids room. But I loved it and chose to have it in my room! As I remember it mom said: The center woman has just had her baby and is happy...the woman on the right is contemplative and by time we get to the left side she has gone bonkers! I think maybe growing up with this painting in my room, influenced my aversion to motherhood! 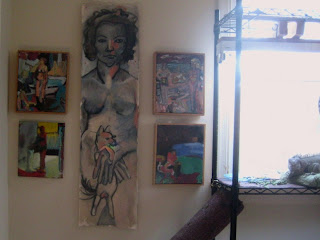 Truman with group of self portraits... 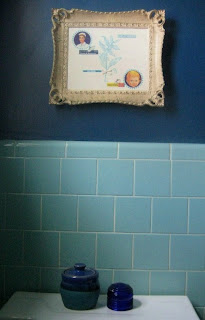 The collage is one my x-sister in law made. She made awesome work, I am happy I am lucky enough to have one. MY dad made the small two-toned pot. I love it! The cobalt glass is an old treasure I found and am very happy to be reunited with.
No comments: 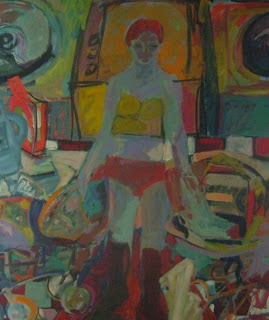 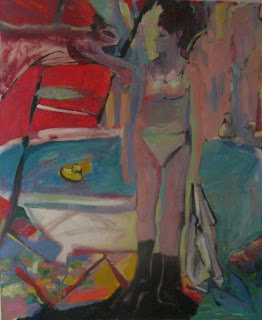 Cat in the Bath 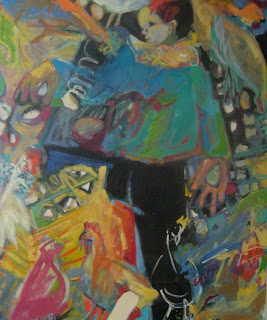 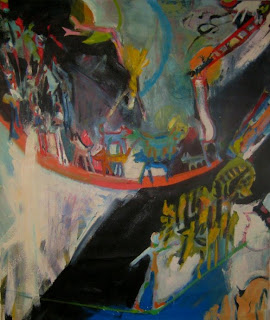 
These are the 4 larger scale paintings I brought home from MI. I painted all of them sometime in the end of the 1980's. They are representative of the work I did in art school before I went to Europe. Before I experienced what art really is and what it means to me. It seems like a funny thing to say. Since I grew up in a home with an artist and had made visits to the Detroit Institute of Art from an early age, as well as going to art school literally on the same block as the Museum. Eating lunch in its courtyard just about everyday. But it took a semester of intense study and travel through Europe for it to really sink in. For me to see.

There is a strong religious theme combined with the mundane labors of ordinary life. I like the washing machine lid as halo! Yes, I did work at an egg farm....

That painting brings back memories of eggs relentlessly rolling towards me, as I managed to place each little egg in it's rightful home...small, large, extra large or jumbo carton. The chickens were not actually running under foot, they were on the other side of a swinging door. Boy could those Chickens make a ruckus! Also they were stinky...super stinky! Resulting in the Bath painting...

After a long hard morning at the egg farm, I was one smelly lady! The first thing I did when I got home was take all my clothes off quickly shut them into a bag in the closet. Then take a long bath. My cat Balou love to walk on the edge of the tub. He fell in a few times.

I never did work in a circus, yet it was also a big theme in my work for a long time. The personage figures are fore bearers of the Beeman drawings I do now. It all comes around in the end.
No comments: 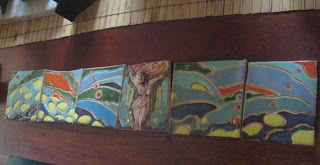 These are all by my mom, Sophia Myers. When I was a kid she painted, but in recent year she has shifted to clay. 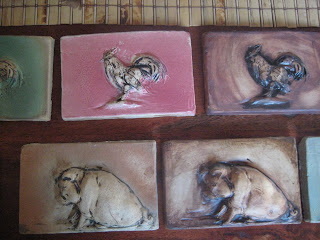 I love these tiles, pigs and roosters. We hope to incorporate them into a back splash in our kitchen some day. She has a lot of them. I am encouraging her to open an Etsy shop. When she does, I can post a link. 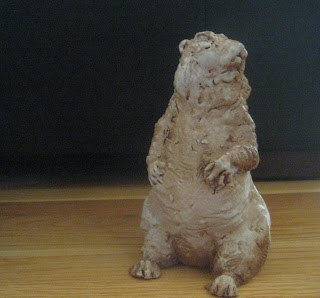 I love this guy. It just dawned on me he looks an awful lot like that groundhog that lifted his eye brow, in the that clip everyone was posting a while back! She has all sorts of animal sculptures. My fav was a Bull dog, he is super heavy and feels like my old friend Humbert (a dog I walked for about 8 years in NY, as a dog walker). But alas, she wouldn't give him up...so I nabbed the groudhog. She excells at horse sculpters. I regret I did not take more photos of her work.
No comments: 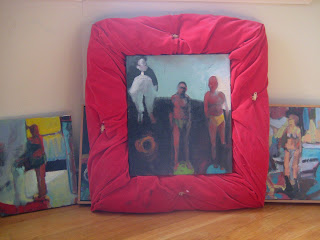 These are some of the smaller work from Grad School. They are all of me and mostly I am in my under pants. In the larger ones I am usually at one of my day jobs (I worked about 3 or 4 jobs at a time to get through school). Like working at the launderette, in my under pants, or working at the Egg Farm (I will shoot photos of the larger ones when I can).

The one with the red frame is an old fav and I will keep this one. I really hope I can sell the rest. I had a thing for soft frames back then. From the gathered satin ones to this red velvet one. I even used Toilet seat covers, the old furry kind (do they still make those?) for frames.
I painted myself as the clown a lot back then (as I have been doing lately with the Pierrot figure from Watteau, on the globes and small sq. paintings). The other 2 figures are my painting advisers, Jan and Micheal. I have spoken of them before. They were extremely influential on my growth not only as artists, but, as an artists living in the world. I think in the painting they are balancing on balls, but I as the clown am floating off mine. 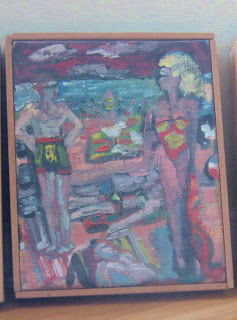 This is a sweet little painting. One of the few I am not in. It is fun, thick and rich...just a day at the beach.
No comments:

I am back with the loot 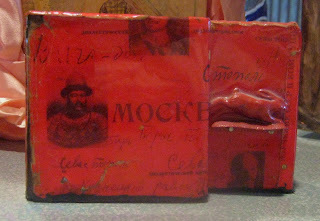 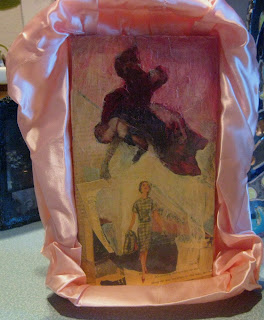 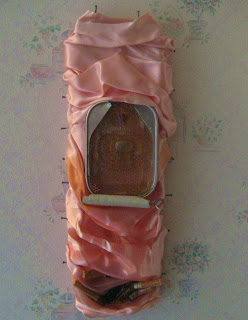 Nipple in a Can 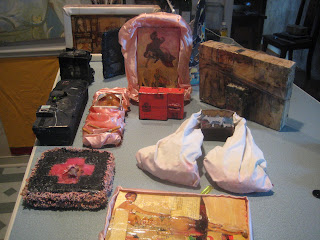 Here is a sampling of some of the art work I brought back from Michigan. My folks have been storing work for me since I split for NY in 1991. I have not seen this work since that time. This group was done just after I graduated from Graduate School. I was rebelling and exploring Gender identity. They break down into girly pink satin work and masculine icky tar and contact cement work. I was burnt out on painting at that time. Trying to be nasty and punk, to be anything but an intellectual art school product.

One of my dearest friends at the time had just come out as a Cross dresser. The idea of what was female and what was male were topical. Painters were generally guys in art school. It was considered a macho media. We painted big and ruff. Expressionism was in the air. Large scale, bold, loud work was all the rage.

At the same time I was doing these little constructed pieces I was also doing large scale tar ones. I remember one was a pair of one piece long-johns (you know the red kind with the trap door in the back). Using resin I mounted the union suit to a board and drilled screws in it, like hairs sticking out or the fabric. It was huge and heavy and kind of cool. But mostly I did these smaller works.

So here is the thing, I have this group of work. The ones just before it were based on counting to 100 (sounds familiar). They were basically color studies large scale, in oil, some on metal some on canvas. Counting to 100 over and over. Before those I did self portraits in a quirky style, expressionistic with lots of humor and color (I will post them next). Seeing them now, the ones that remain. I can finally see the connections. Like a bunch of holes have been filled in. Themes and compositions that remain a constant, when everything else around me has seemed to change. After all the miles and all the crazy shit I have lived through, there is a constant.

This may have been the long way to get here. To my Thanksgiving post. We traveled many miles. Slept on floors. Frankenstein met his dog cousins and peed in new places. We ate and laughed and drove and ate more. Now that we are home. We have completed a circle and we may not say it out loud. But in the end, some holes have been filled, connections reestablished. We are reminded for better or worst who we are.

Around circles of life...