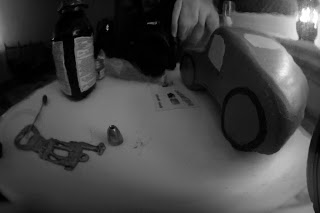 A week ago today I woke up and realized our power was out. I saw Truman on her perch with no heat lamp or lights and rushed to warm her. She was cold as ice. It is funny how automatically while trying to comfort and warm her I bounced up and down gently and spoke in warm tones. As if she cared, as if she wanted more than my heat. As she got warmer she released her grip and rested her head in the crook of my neck. We both got what we needed.

Luckily we have a gas fireplace, so we had some heat. I set Truman up on a blanket in front of the fire. She stayed there or in my arms until the power came back a day later.

I gathered all my candles and kept them going not only for light but for the impression of warmth. As crises go this one was pretty easy. We got take-out and Mr. Eleven even went to the movies (He saw Paranormal Activity, as you can see by some of the photos he took,later). We even picked up a hot water bottle for the lizard, that has since become her best friend--she loves it!

Mr.Eleven was lost without his computer and TV remote. I am used to being alone with my work--living in my head. It is my job, so I was content. He was restless. This prompted some creative activities. He played his guitar for us, by candle light, Frankenstein, Truman and I lay by the fire with eyes shut listening-drifting. Later he got the camera out and played around with the settings and got some pretty cool photos, check them out here.

One week ago we spent a day and a half in a strange isolation. Not all of our neighbors lost their power. We saw one neighbor late at night siting in front of his garage drinking a beer, facing his car bathed in it's glaring head lights. Still another fled in a glory of generator light and hubbub, to a Hotel. As I stood by the window bopping up and down cooing to my green friend, I found comfort in my own drama.