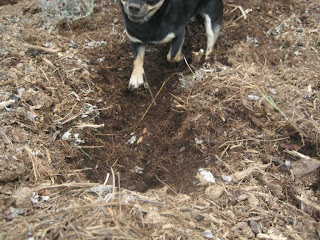 Happy Frankenstein Friday! The Chug and I have been gardening. Click here to view Frankenstein moving earth...with gusto!

onward and a lovely weekend to all!....
No comments: 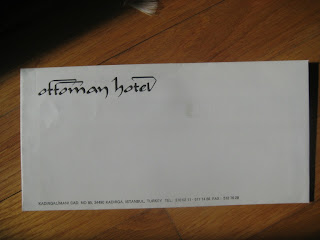 Yes it looks like The Hundred Dress Project is taking a nap and The Trapper Keeper Project is holding court, here.

Today's item is an envelope from a hotel we stayed in in Istanbul. I looked up the address and the hotel is still in biz and still looks the same as it did in 1990.
After reading some of the reviews it seems little has changed. My fav tells of a couple who were asked to produce their wedding certificate in order to book a room. Others talk about how isolated yet close to major sites the hotel is.
It was walking distance from the Hagia Sophia, Blue Mosque, Topkapi Palace, The Under ground Cistern and lots more amazing places. I remember a tiled room at Topkapi, where the harem and unic's lived and Emeralds bigger than the ones Angelina Jolie wore to the Oscars!

People washing their feet before entering Masques. The amazing space and energy in the Masques...I still dream of these places.

I remember our room had an ottoman and I loved that!

I remember getting coffee and Halva at the market. The blocks of Halva a sweet desert, were huge, about 3'square. Also spices in large mounds that smelled amazing and were rich pure colors.

I did take photos on this trip and I think I still have them. When I can dig them up I can provide more images to fill in these memories.

Who knows where the next scrap of paper will take us?! 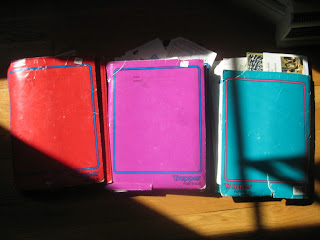 These trapper Keepers are from 1990. I retrieved them from my parents home this past November. Each holds my treasures from an amazing program I took part in at in 1990, called ECHT. European Cultural History Tour has since broken the tour into smaller but equally intense and rewarding educational tours. The tour I took part in started in London and ended in Egypt, we visited 14 countries, studying along the way. We had a Political Science, History, English and Art professors along who gave lectures corresponding to our location. I have been processing what I learned that semester ever since. But this is the first time I have looked at the contents of the Trapper Keepers since then. 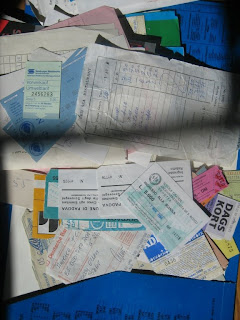 I have decided to make a project of organizing what lies inside. As you can see there is a lot of ground to cover here. Back in 1990 I was in graduate School studying painting. I had little money and worked multiple jobs to cover expenses. Most of the other participants were well off and bought expensive keep sakes at each location, ate in fancy restaurants and sent books and treasures home along the way. I ate, bread and cheese and collected scrapes of paper as mementos...and here they are. 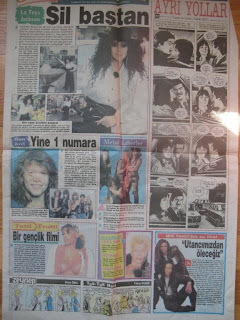 Our fist item is a news paper from Istanbul Turkey, 1990. Check it out, Bon Jovi, Milli Vanilli and La Toya! I have a rush of memories from our time in Turkey. The reason I kept this paper was that in it is a photo of some Turkish soap opera stars. The night before a bunch of us were at a restaurant and at the next table were these soap stars. For some reason they zoned in on me! I was the only one in our group who had my head covered, maybe that is why?...in any case they started buying me Ouzo. Proclaiming in broken English: it is mothers milk drink-drink!..and I did. Soon they had me up on the dance floor doing a really bad version of their traditional dance.
The next thing I knew there were photographers with old timey flash bulbs snapping photos of the American with the soap stars! Yes, Turkish poparazzi appeared out of nowhere! It was a great night! 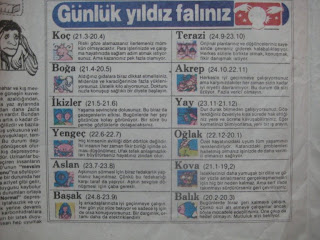 Here is some other things in the paper, Horiscope's 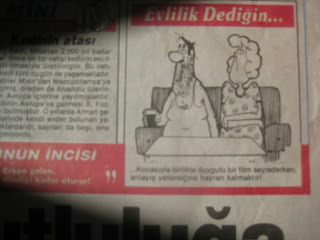 and I love this, it's the Turkish, Lockhorns!...or close to it.

My plan is to explore these priceless scrapes of paper and organize them in order in a scrap book. One item down a whole bunch to go!
onward.....
No comments: 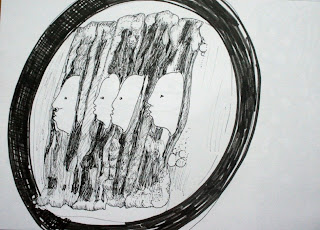 I find for me the best source of motivation is calling myself out on my faults. A few weeks ago I proclaimed that I had joined Sparkpeople. It really helped me for about 4 weeks, but lately I have been slacking off. So in an attempt to get back on track here is: This is why your fat! It's motivational!...Just in time for lunch!
No comments: 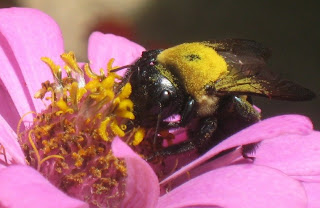 Check out this amazing Bee art.
No comments:

Speak to the Face: Tracey-Face Tuesday 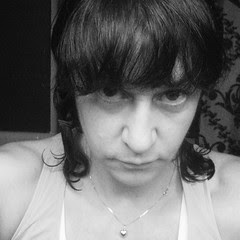 Speak to the face
Originally uploaded by tracey st.peter

I am starting a self portrait project. Each Tuesday I will post one or more self portraits. It is called Tracey-Face Tuesday. Here we see, Speak to the Face. This is poster art for a one woman one act play, done in mime to the music of James Taylor. The sort of performance that has no humor yet leaves you giggling in the back row uncontrollably!

One last cheer for the eggs! 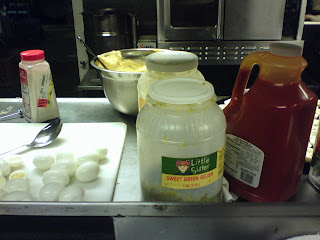 I was sad that we forgot to take photos of the 2 large trays of deviled eggs at the opening of WORLD BALL. But to my delight Jarvis snapped this shot of them being made in the Kitchen at White house catering. They were divine! My fascination and love of deviled eggs goes on and all the eggs in the photo above made for many happy tummies!
No comments: 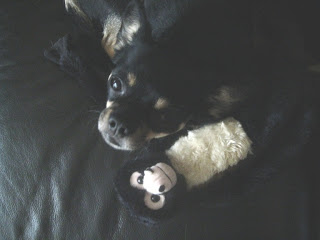 Frankenstein loves his new toy! Mr.Eleven got to plan a dream day for himself on Sat. He chose Breakfast at Cracker Barrel and a visit to Bass Pro Shops (a huge chain store full of taxidermy critters, shooting galleries, a fudge shop, water fall and huge fish tank. I took a bunch of photos but they unfortunately got deleted). I have to say these places freak me out! But I went along with a smile to make TBIH happy. He got some fishing supplies and we picked out this cute minkey for the Chug (that I must say has nothing to do with that monkey that got shot or that horrid cartoon...it was just cute and we knew Frankenstein would love it)....and he loves it!

To start off the new week, we go forward, with a smile at the sweetness of a Chug careing for his Minkey!
onward....
No comments: 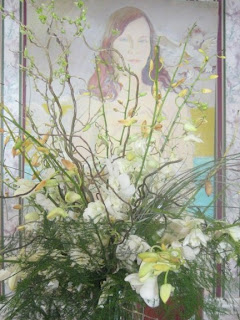 Heather hiding behind flowers...I love this even better than the painting alone! If I could afford it, I would buy Heather on The Half Shell a bouquet everyday!...heck I'd even send one to the real Heather if I had the doe! 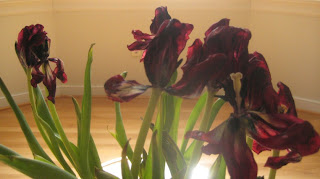 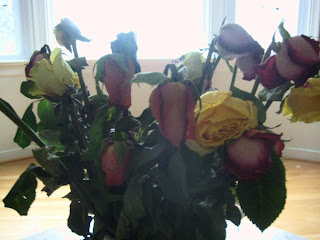 My lovely flowers won't be with us much longer. But I am struck at how much richer and defined they are now in their waning days... To my eye this is the peek, the essence of loveliness. Maybe I identify with them. In any case, although I delight in the fresh and brave crocuses who are popping through the cold February soil, it's the richness and resilience of the ones who have been around a while that delight the eye and steal my heart ...
No comments: