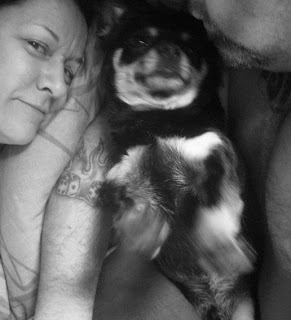 I thought this would make an awesome Valentine's day card, if families sent out such things. Frankenstein's Arms Are Not to Short to Box with God, would be the title. But in reality this is my offering for week 45 of my 52 weeks of self portraits.

I recently mentioned I was sitting on an egg, to clarify things, I am not pregnant!--geez! Today I will say I am working towards a big project that I can't talk about till it is a bit further along. But, I can say everything I am doing is moving me closer to it coming to be...and it's not a baby!--Geez!

I will say one thing about setting goals and making big changes. It is a slow process. There are plenty of times it feels like it is useless to go on. That the bar keeps getting moved as soon as it is within reach. Then all of a sudden it is behind you and there are new things to reach for and they too seem so far away...

When I was a kid our neighbors would flood their back yard and turn it into a big ice rink each winter. All the kids would gather and play games like Red Rover, What Time is it Mr. Fox and Crack the Whip, with our skates on. Crack the Whip was basically every one linking arms with the center person in the center of the rink. Arms linked like a chain, we would all skate as fast as we could, (think Rockettes on ice), the poor kid that got the end slot would at some point fall or let go and whirl off the ice in a dramatic fashion- with a whoosh and a plop!

Sometimes I feel like I am that kid, hanging on to the end--at the end of the whip, but, hanging on! Or maybe that little kitty on the limb: Just Hangin On! No, I am a bit further along that that, I know that, it just feels that way sometimes...

Good thing there are Sunday mornings,to spend some time appreciating where we are right now. The quiet moments of doing nothing that mean everything. That bring our goals with in reach at least in focus for a while. Hey if Frankenstein's arms aren't to short, well, then nether are mine!