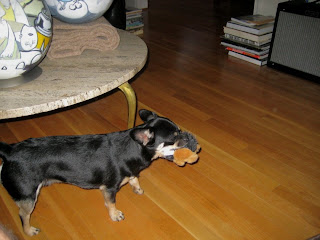 After he gets a yummy treat Frankenstein like to celebrate. He gets one of his favorite toys, from a secret hiding place, then carries it around the house. 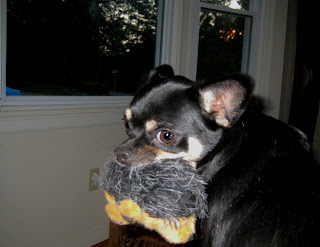 Here he is multi-tasking, watching the street, and letting us know if anyone dares to walk or drive by our home, holding his precious baby all the while. 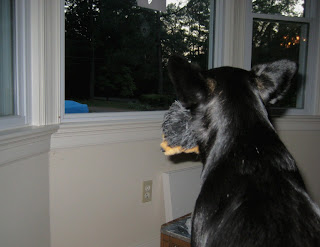 Tonight, The Eric Schindler Gallery is where it's at! If you are around come on down, and check out the art! That is where I will be.

I have been doing a lot of catch up work around the house and yard...tomorrow I paint!

Onward...and have a great weekend! 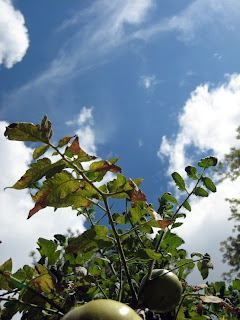 A day of remembrance. What comes back to me from that day most clearly and most often is the sky that day. Most recounts begin with it--It was a perfect sky...the perfect blue, clear, just a hint of Fall in the air...a day where you felt like nothing could go wrong.
Well as we all know things went terribly wrong. My personal journey that day, the images that are burned in my mind, are personal. What I want to think of today is how we came together. That feeling that all of us have a common ideal, that we were one. There is a lot of division going on right now. That dark cloud is like the one that invaded our lovely NY skyline. It was like a monster leaning towards Brooklyn for days. We could smell it, we knew what it was.
With it looming over our heads we came together. In my case (this part is personal) it was, at The Brooklyn Ale House, where I had an art opening just days after, 'it' happened. It was the first time a lot of us even spoke out loud, and boy did we ever. We hugged and laughed and felt...felt that we were not alone. We came out stronger. We are capable of that, this I know.
Today I am in Richmond and the sky is gray. I long for my friends and the hugs I could share with everyone of them...but I know that this gray sky is the same sky and now and forever we, all of us alive or resting in peace are in this together.
Under one perfect blue sky, together we stand, all we have to do is look up to remember. Live in the blue and not the darkness, of that cloud!
onward we go......!
No comments:

a little rant and a lot of art! 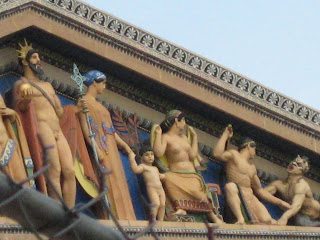 Hello!
I just posted a bunch of photos I took in front of the Philadelphia Museum, you can check them out here.
I did not take photos in the Museum. In fact it really pisses me off that people do! I know the Museums pretty much have to let people take photos since you can't really monitor cell phones and small digital cameras. They do enforce a no flash rule...at least there is that. I admit I am a bit of an elitist about Museums.

I worked at the Metropolitan Museum of Art in NY for a year. One of the perks was that before the doors were opened to the public each day, we were allowed to roam the galleries. In peace! I can not tell you what bliss it was, viewing, before the crowds came in. I am of the opinion that art is visual and should be processed cleanly and purely by looking at it and letting it speak to you visually. I despise the head phone tours! It is like eating a fine meal in front of the TV! How can you see what speaks to you when a voice in your ear is telling you what to look at and what to see, and think? These people stand in front of great works of art and have one of their senses occupied. OK, I like that they are trying to learn, but the two things should be separated. If you want to understand art, do some home work then look with your own eyes and feel it. Give the right side of your brain and the left side different times to process things in their own way!

So... I was in an Icon gallery at the Philadelphia Museum of Art. There was a family, mom, dad, and daughter (around 17 years old). Each had a digital camera. There were about 10 little icons in the room. But mom was in front of one taking a photo, dad in front of the next and daughter in front of yet another. They moved through the gallery systematically shooting photos of each work. Blocking anyone else from viewing! It wasn't about experiencing the art it was about owning it! That is what really burns my ass! For all I know these people were going to publish this and sell the photos. From an artist stand point, what you want people to do is let it flow through you and what sticks is real. It is the opposite of 'owning' it. Art, what it adds to the world is free!

What I am talking about has nothing to do with buying or selling art. The owning I am referring to is different. Like, for example, someone 'owning pain', or 'owning patriotism'...it is ours, everyone's, not just yours!

So I went to another gallery and looked at other stuff till the photo family had moved on to steal/block other art.

Before I went to the Museum I was looking at this.
It is pretty obvious that what I am doing, painting on sculpture (my globes) relates to the painted sculpture. Now in art school we learned that it was not a good idea to paint on sculpture. 2-d on 3-D is a no-no. But like everything else, nothing is new, we just have to rediscover things. I love the colors on the Greek sculptures! I remember learning that the great Pyramids were colored too. That the cap of the largest was Lapis Lazuli...wow!
So that is my rant for today... 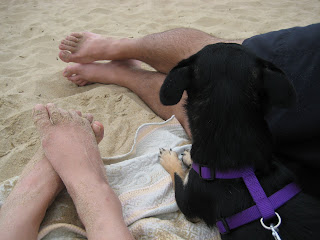 You can see photo's of our mini vacation here.
No comments:

A day at the museum 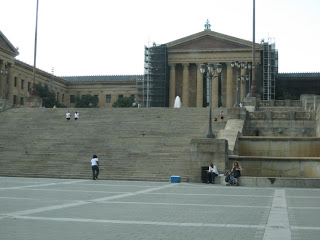 Before our mini beach vacation we took a day trip to Philadelphia. I spent the entire day looking at art, while The Big Head, went to a biz meeting just outside of town. After my long day of walking and looking I sat on the steps to rest. It was very entertaining. There is a constant stream of people who park out front just to run the "Rocky" steps. They run, they strike their best muscle arms over head pose at the top of the stairs, get 'the' photo, then jump back in their cars and speed away. 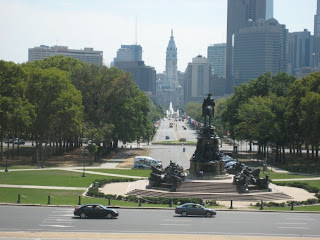 It was nice to breath northern air again. To be in a big city. I chatted up all the guards just to hear them speak in a northern accent. But truth be told, when we did get back home we were both very happy to be back in VA and it really feels like home. 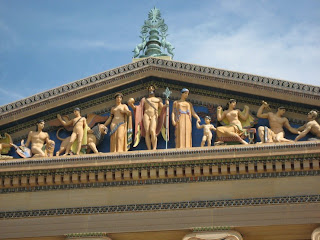 I will write more about the art I saw and these colored sculptures very soon....good stuff, connections and other museum related observations....onward..
No comments:

A visitor to our yard 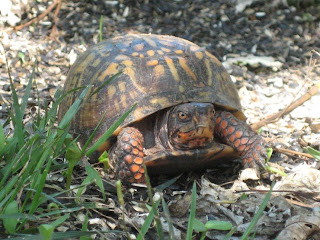 This turtle has been in the yard for about a week now. He mostly stays by the pond but sometimes cruses around the yard. 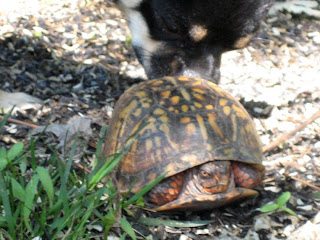 He doesn't much like Frankenstein's way of greeting...sniff-sniff! Later the Chug burred him, by pushing pine needles and twigs over our friend the turtle.
No comments:

frankenstein's first look at the ocean

frankenstein's first look at the ocean
Originally uploaded by tracey st.peter
We are home! Here is a clip of Frankenstein first look at the ocean. We climbed into a life guard chair and watched the sun set. Frankenstein loved the beach! We ran and ran in the sand, he chased sand pipers down the beach, who squeaked just like his toys at home. As you can see my eyes are tired from our long drive and getting up early that day. But after a few days away, I feel recharged and ready for the Fall.
I will post more mini vacation photos later today. It is good to be back!
onward!
2 comments: