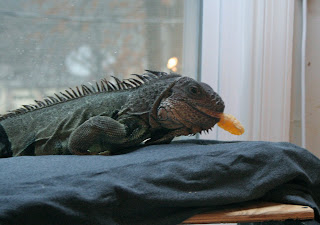 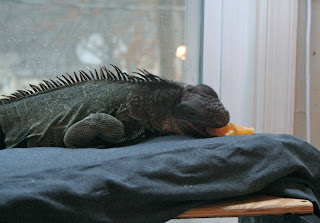 That's one happy lizard! Sometimes it is the little things! 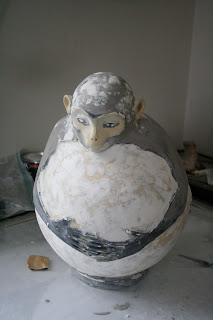 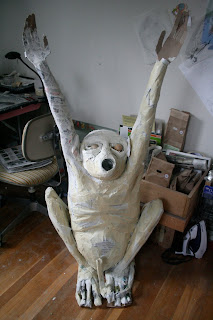 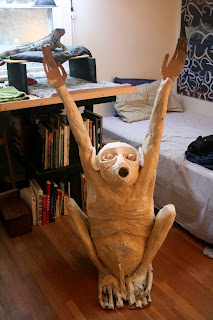 Almost killing myself with lacquer was a wake up call. It made me really appreciate what I have been doing with these paper sculptures. I had these notions of covering the Monkey Ball with mirrors or eggshells. But after sanding and painting it over and over, I found what I was looking for, is not in the materials it is in the process. It is in the quiet refinement, becoming one with the work a closeness like no other that the art lives. I got enchanted by decoration but what I was seeking was bigger more powerful and much more illusive. I can see that now, I can feel it.

Onward Monkeys!
--check out Truman on her perch behind the monkey, she is enjoying a slice of orange!
No comments: 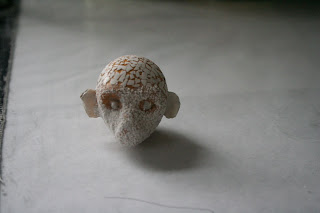 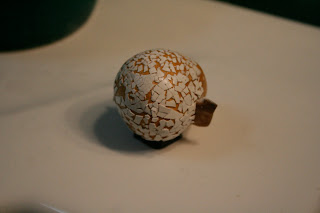 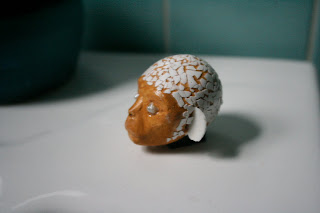 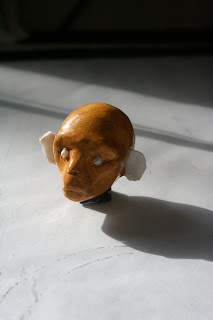 I have not posted in a few weeks because I have been so busy, but that hyper drive almost did me in! In fact this little tiny monkey head almost brought me down.

I began on my Monkey journey Last Spring, it really kicked in when the Gulf Oil spill was going on. I was so horrified by the entire disaster but especially the images of that little bird immersed in black gunk they played over and over again. That feeling of being lost and poisoned and dying. I had nightmares as I am sure many of you did, suffocation dreams.

I remember one of my first impressions when I moved to NY, a day when I saw a man laying on the sidewalk, he may have been dead and no one seemed to notices (later on I figured he was a local junkie and the locals were just used to this, I think when you are in a new place you bring your old perspective and project a lot on the new environment..but that is another tangent altogether)...then later in the day I walked up on a crowd of people all working together to save a pigeon. One ran to a deli for food and water another found a box and blanket. We seem to afford more empathy to animals than humans. I have to say I witnessed may acts of human to human kindness over the year in NY and found my fellow New Yorkers to be the most caring of people. The animal empathy thing still holds I think.

So there is the element of empathy, the other element here is toxicity. Thinking of poisoning the planet like the oil spill did, I decided I would no longer do the same with my art. I have been using basically edible materials for all of the monkey so far. But there is this thing that happens when one makes such a hard turn in direction.

It feels like a limitation. Last Thanksgiving we had our friends over who are vegan. We are not. We basically ate as we normally do and they had vegan foods. I am an 80% vegetarian, meaning I eat mostly vegan or vegetarian foods but sometimes I like a good meatball. However, the idea of being Vegan, (I was for a few years, till the depravation got to me. When I was chastised for eating one gummy bear by my vegan pals) planted a seed in my head. A meat seed! After Thanksgiving I went on a meat eating binge, just to feel my meat eating wings! It was just the thought of never eating meat again that got to me. I am back to 80% where I am quite comfortable now.

All this non toxic art made me feel like maybe I was compromising my art. When I read about the traditional method of eggshell mosaic I thought OK I am going to go with the art tradition and not my non toxic crusade. As if toxicity has anything to do with good or bad art. Bad idea!

It all started out great I used the respirator and installed a fan in the studio. I have been going to the gym and getting all this extra energy, clearing my lungs and pours. I was working on 3 or 4 pieces at once, sanding painting then working with the lacquer. I got sloppy and forgot the respirator a few too many times! My body was open and ready to absorb all the chemicals! I was sick all weekend and am just starting to feel better. Drinking Milk Thistle with lemon now to detox and will have to be very careful going forward.

To give you an idea of just how tedious the eggshell mosaic process is, this little head took me over 2 weeks to cover and it is incomplete! I did at least 4 applications of shell each day. The face is crushed eggshell I sifted over the lacquer as if it were a tasty desert. I will never use lacquer again! But I am going to try the technique with water based Poly, in a few weeks, I just can't face that process anytime soon.

Talk about walking the walk, I walked the toxic highway for my art and lived to tell the tale. But it was a false choice, you can make great art without poisoning yourself or the planet. Maybe I will be an 80% non toxic artists in the end. The label isn't important, the forward motion is, with empathy for all living things I move forward!