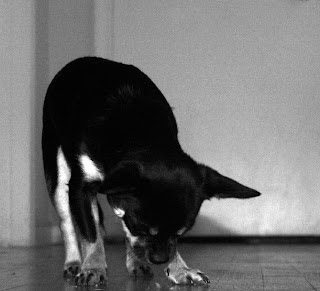 All better! He is just finishing up the last bits of his dogie bagel. Our local Bagel shop sells them. Yummy!
2 comments: 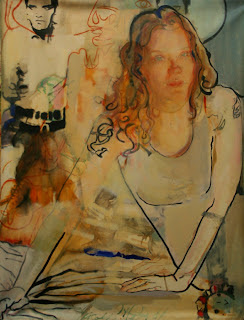 I did 2 portraits of Robin. The other Robin portrait was one of the first things I posted when I started the blog. Here we see, Robin in front of the TV. The news was on. I don't remember what it was about. But we can assume it involved the folly of man, the inclusion of Guernica, and Elvis with a gun, indicates war. I told her to wear something or bring something that would tell us about her. She showed up with the doll seen in the lower corner and a string of beads to wear around her neck. I promptly found a dress for her to wear from my closet. I later gave the dress to her because, it was meant for her not I.
I was attempting to show the news reflected on her. The fragile beauty, standing up to the grotesque flickering TV screen. I think I could Paint her forever! She is so smart and strong and driven and above all the most self deprecating person I know. It frustrates me, but makes me love her that much more.
2 comments:

A wake for the tree 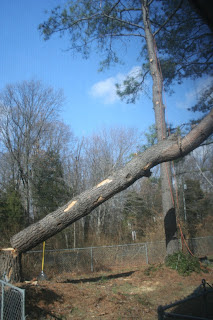 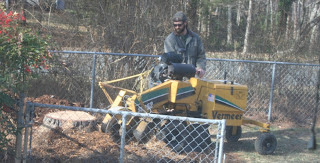 Grind!
It is all gone. We are so sad our tree is gone. The yard feels so bare. Not long after the Woodchuckers left, the birds came back. The birds waited all day for water, baths and food. It sounds like a party out there. Lots of singing and splashing going on. Like a wake for the tree.
No comments:

A view of a tree 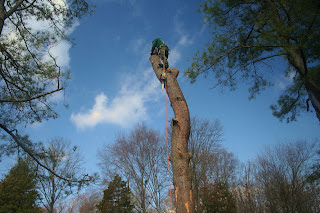 After all the branches were removed and chipped. He climbed down with his dangling chain saw. 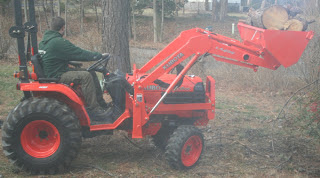 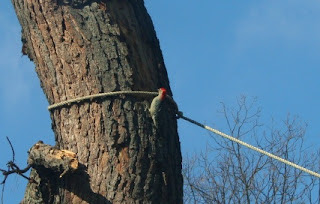 A wood pecker gets a last meal at his favorite lunch spot... 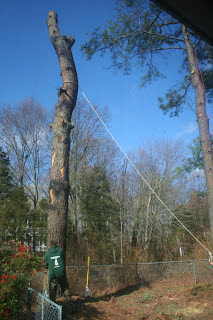 They anchored the huge tree trunk and he cut it from the bottom... 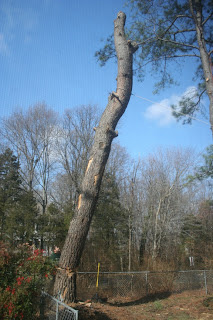 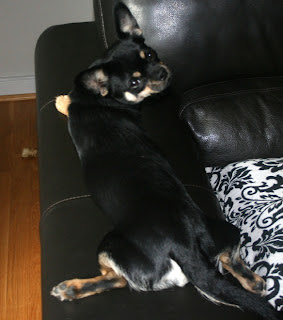 See no string! He is doing good today. Watching the Woodchuchers from his favorite viewing spot.
No comments:

Ahh...and now for something completely different. Aphordity take me away!
No comments: 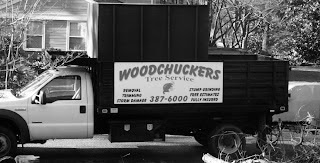 It's the Woodchuckers! The boys are back. 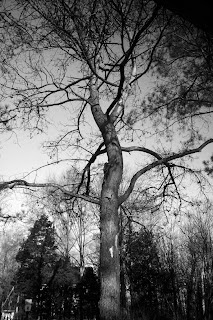 Not long ago I found some termites who had infested a log next to this tree. The tree is about 75 feet tall. It died this past Oct. 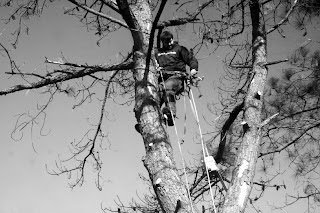 The boys are here right now methodically cutting the tree and chipping it. The tree is infested with Pine beetles and termites. From what we have read so far. Termites are everywhere under ground here. They tunnel and find dead wood to devour. After almost losing my puppy. We face, possibly, loosing all our trees home and even my studio! We called the chippers and they gave us a reasonable quote, and started work today. We are going to fight those little buggers!..."as god as my witness!"...ya got to quote Scarlett if you live down here!
I'll post more photos as the tree comes down.
No comments: 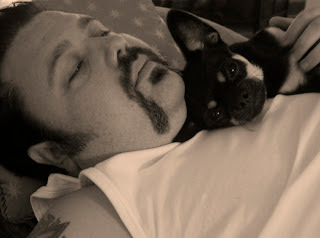 "When you are tiny you have to be tough. This world Isn't kind to little things" I heard this quote from the movie: Infamous, the other Truman Capote film. We watched it, as we waited yesterday.
It all started when I heard Frankenstein crying from the laundry room. When I investigated, it wasn't pretty. He bolted from the room and headed for the living room. He had made some poop spin art all over the laundry room. When I caught up to him it was apparent something was hanging off his butt. It was a string! A long string about a foot long coming out of his rear end. He was running as fast as he could away from the string. When I finally caught him. I knew what I had to do. But rather, I told Mr. eleven to look up on line, 'string in dogs ass'. We found a bunch of info. basically it said if it feels tight don't pull hard. It could cut the intestine and kill the dog!
Frankenstein can scream. Not a whimper or a cry but, blood curdling screams. I managed to pull another foot and a half of string out. But it was apparent at that point that I shouldn't pull anymore than that. We decided to see if he could pass it by morning, if not we would go to the Vet.
This all took place at 8 pm. For the rest of the evening I held him like a baby. His head flopped over my shoulder. I rocked back and forth, 'it is going to be alright'. I said it over and over, for him as much as myself. He slept curled up under my chin.
Yesterday morning, Frankenstein and I went to the Vet. He told me what I had read the night before. He used the analogy of sweat pants in a dryer getting bound by a lose draw string. He asked how long I thought the string was. We had already pulled 2 1/2 feet out! He wanted to try and let the dog pass the string before operating. The operation would cost 2000. dollars! Mr. Eleven said with all the extra charges that was really 3000.! I handed over my puppy.
I can't even express how distraught I was. Empty is how it felt. Like I handed over my heart. Possibly forever.
When I got home I cleaned up poop, I cleaned up every possible thing a dog might put in his mouth, I even cleaned out drawers just to keep my mind off things. In the middle of this I found a message on my phone. It was from the puppy rescue people, I got Frankenstein from. Back when his name was Big-D (can you blame me for changing it). They wanted to know how things were going! Needless to say I didn't call them back. I kept thinking of Ellen. Like they would come and take my dog away because he ate some string! Guilt!
A few hours later the Vet called. They gave Frankenstein an enema. He would let me know how it went. Not long after that came the second call. He passed it! Yippy!..I cheered over the phone. They wanted to keep an eye on him till 5 pm. But I could come then to pick him up!
When the Nurse came out with him in her arms and he saw us, his little tail wagged wildly. We had a group hug, our little family of 3.
The house is a home again! Lots of kisses and cuddles last night. All thanks to the 2000. dollar poop!
5 comments: 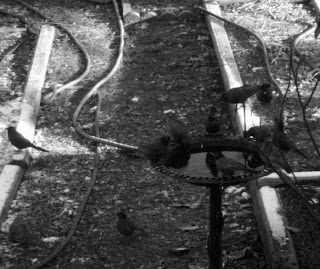 A flock of Robins! Mr. Eleven left the camera on the Black and white setting, and I didn't notice till I down loaded these images. We can still see that they are Robins and that there are a lot of them. I counted 10 at the bird bath and about 15 at the pond. It was 19 degrees when I got up this morning , we have one of the few water sources for the birds that isn't frozen. The pond has a partial covering of about a half and inch of ice. It is now covered in Robin poop! They have been splashing and drinking water all morning. A few Waxwing's showed up but the Robins bullied them away from the water.
No comments:

A Man for Monday 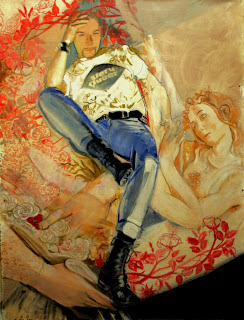 Daniel is a great friend and a local hero here in Richmond. I know him from Brooklyn. But he went to school down here. He has directed and stared in a lot of theater here. He also is active in theater in NYC where he lives.
I love this painting in fact I was thinking of using it for a Christmas card after I finished it. I did make postcards of it. When I look at it, it is like getting a big hug and kiss from my pal!
No comments: 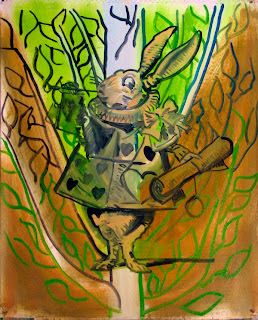 Another 100 dresses project has reveled it self. I received the most awesome note from Nicole Bauberger this morning. She has done more than one, one hundred dresses paintings and shows already, and even some dress cookies! I love her title: 100 Dresses for Decembers Deepening Darkness!
I once made heart shaped cookies for an opening of a show I did, based on Love. They were all hand painted with food coloring. I feel a real kinship with Nicole. She is also doing work with encaustic wax as well as painting birds and landscapes. I am gearing up to do an encaustic globe and am enchanted by my birds. What a great way to start the week! Felling connected and inspired...onward!
No comments: