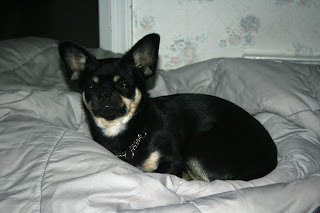 Now that it is colder out, he likes to be as warm as possible. I set him up with this sleeping bag. Cozy little ball-o-dog.
No comments: 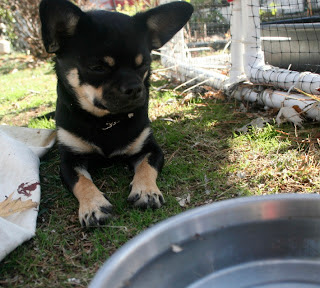 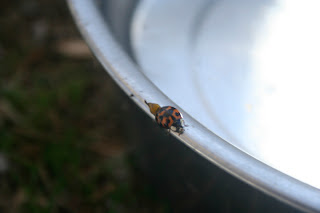 What is Frankenstein looking at? It is a ladybug. It kept walking around the edge of his water bowl, round and around and around. We took these photos about a month ago. On a warm November day.
2 comments:

This time of year 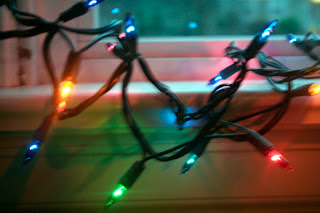 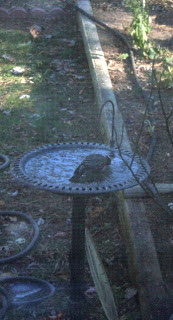 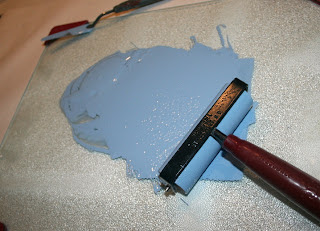 This time of year means craft projects. When I was a kid the thing I most wanted to find under the tree were craft kits. Things like paint by numbers, candle making, leather work, string art. I made them all! If only there was Etsy back then.

For the past week I have been crafting. One project was a sunglass case. I have to admit I am not very good at following instructions. I get caught up in the excitement of making things and have no time to read. So, when I felted the wool-soy yarn for the glass case (that just means washing it in hot water and running it through the dryer). It shrank a lot more than I though it would. It is now my little credit card wallet.

But my main project is making holiday cards. I never took print making in college. I did work for Emil Wedge a successful printmaker back in MI. But most of my duties involved taking care of his cats. He had over 30 outside and one big fat one inside who only ate shrimp. I cleaned his home and studio. He would do things like break into a flamenco dance and toss his pencil across the room. Then yell at me, as his assistant I should have anticipated his move and had a new sharp pencil in his hand, before the other hit the floor. We did produce an addition of a stone lithograph. But, I screwed it up by tracing one of the layers on the stone backwards. We printed it anyway and he sold it. I am very good at cleaning and caring for animals but my printmaking skills are not so good.

It took me about 4 hours to rip the rice paper into squares for the cards. I printed yesterday. I think it went well. I printed 60 prints and they all look consistent. I don't know if they are good or not but I think they are cool.

Since our nabe across the street are super Christmas celebrators. They have had tons of lights on their house since the week before Thanksgiving. They add new lights each Sunday. Our house looked so sad and empty next to theirs, so I put some lights up too.

I didn't get photos of this. But check this out. At the end of our street are a bunch of Churches. Last weekend in front of one was a huge banner: Drive-thru Live Nativity Sat and Sun 7-9. Yes, they actually had a live Nativity, a Happening, a drive thru! Mr. Eleven and I drove by just before it started. Picture Three little stages in a church parking lot. In the first an Angel telling Mary she has been sperminated by god. The second had the wise men and some Lamas. In the third, the traditional baby on the ground with a bunch of folks looking on. Also, goats and sheep tied to near by trees. We saw it before it started from the red light we were stopped at. The wise men had Starbucks to-go cups, in hand! Conceivably, you could go to the McDonald's drive-thru and then hit the Nativity, get your 'church on' and then head to the Mall. Magic!

It snowed yesterday. Just for a few hours then the sun came out and it was gone. Just enough to remind you it is winter. It has been getting colder too. Not crazy cold and harsh weather like my friend in Seattle has been haveing or the freezing rain that hit Michigan. But cold enough that this poor Robin had to chip away at the ice on the birdbath to get his morning drink.

It is that time of year, for crafts, colored lights and ice. It is also the time of year for the weirdness of a live nativity. A time when eating a full tin of homemade candy is OK. A time when maybe a little magic can be found.
4 comments: 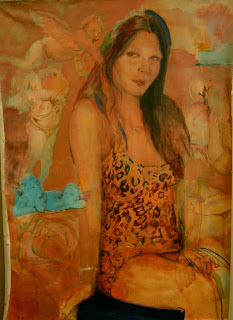 This is the second portrait I did of Virginia. I caught just as much shit for this one as the first. In this one I saw her as a siren, poised on her rock. Her song luring men off course.
Virginia didn't need a Magic Girdle to conquer a room full of men. But I am sure her gifts came from Aphrodite herself!
No comments: The Magic Girdle, even better than Spanx!
No comments: 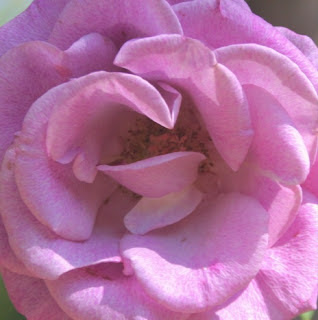 As we drove along the curving mountain road, Alain talked about his blues, and I talked about my purples. Butterflies, he then told me are very good at seeing purple. In fact they have a very different range of color vision than humans. Reds are usually invisible for them, but they can see all the way up the rainbow scale from yellow to beyond violet and into ultraviolet.
How could anybody know that? I wondered aloud, and he told me that some flowers--and butterflies--appear to human eyes to be completely white. But when you look at the petals or wings under an ultraviolet detector, they are covered in ghostly markings that butterflies respond to as signals.
from:Color by Victoria Finlay p. 300-301

I read the book Color back in 2002. I woke up this morning thinking it was time to revisit it. The presidents press conference was on the radio, as I was reading this passage. What struck me is how differently we see things. How some of us see patterns and markings where others see none.

As a painter, you look at the image before you for hours on end. You have a close relationship with the surface. Every color and stroke that went into its making, is part of you. Visual impression combine with it's history to create what you see. But the observer, only sees the top layer. So as the painter you never quite know what the viewer sees.

I can't imagine what a butterfly sees or Frankenstein or even Mr. Eleven! Somehow we don't bump into each other and we manage to communicate, most of the time. There are so many variables, life experience, optics, memory...

The idea that butterflies live in a rich world full of color signals, where we only see white, is more than magical. It is science! It is really quite wonderful. It fills me with questions, mental perspective shifting gymnastics that are mind bending. Like Dr.Seuss' Horton Hears a Who, did when I was a kid. What we see isn't the only vision, isn't the only reality. Pretty cool stuff!
No comments: 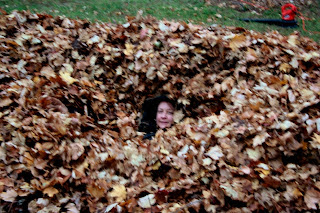 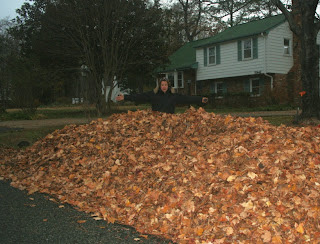 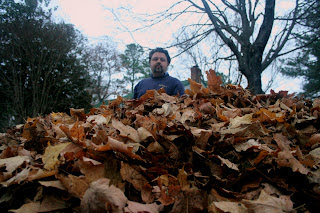 What is no longer in the yard?..Leaves! Mr. Eleven and I raked and blew leaves all weekend. I think about 15 hours of nothing but moving leaves. It was actually a lot of fun. We are both feeling it today. I never knew how many muscles I use to type, but I feel them all working now.

Sat. night we went to our friends house to sit around the fire and shoot the shit. We also went to Mr.Elevens fishing club end of year dinner on Sunday night. Yard work, backyard get-togethers and a Fishing Club Dinner, I am not in Brooklyn anymore!
2 comments:

A Man for Monday 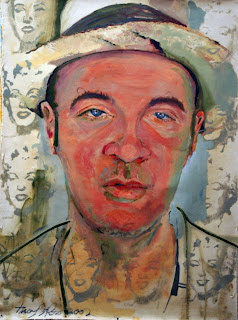 I painted this portrait of Bill and never showed it to anyone. At the time I was not happy with it at all. His head is about 4' long, that is a lot of head. It has a bit of a Chuck Close feel to it. But I didn't use a grid. I like it much better now.
No comments: