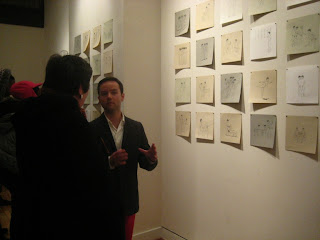 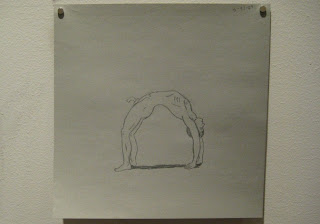 When you get to be an ol granny like me, sometimes you get the awesome treat of having full "circle moments" (Thanks Oprah for another slogan that fits) that sneaks up, taps you on the shoulder and says, guess who. I had that happen to me this past Friday at the Eric Schindler Satellite Gallery opening. Where, I met Cupid Ojala.

Here is his artists statement:

"I grew up in a rural community, was raised as a Mormon and got a sex change. My drawings and paintings are about perceived masculinity in society and figuring out my place in our culture. I created a transgendered character, he is short with the proportions of a woman, scar marks on his chest and abdomen, he also has a faucet as a phallus. The scars and faucet represent surgeries accessible to transmen. I made a drawing a day for three months, using my own experiences as a vehicle for these characters to play out daily scenarios. I then used these drawings for more specific images of my experiences. I want to show people the humanity in the process and educate them about the psychological, physical and social hurdles I deal with as a transgendered man."

This circle takes us way back to the early 1980's. I was in art school and dating my soon to be husband who was also an artist. We would take field trips from Detroit to visit his brother who guess what, was also an artist, in Ypsilanti MI. These visits helped steer me away from a miserable life as a graphic designer towards my current path of, endlessly struggling artist! By the way nothing against graphic artists, it just wasn't for me.

Our weekend visits were like courses on philosophy, politics, art, music along with lots of drinking. My soon to be brother in law, lived on campus and was 40ish. He worked a job below his intelligences and skill levels and painted at the college. He painted the most amazing strong images, watching him dance/paint was an intense experience. We loved him and eagerly awaited the next visit, to learn more, to get in touch with the things art school was depriving us--. This was serious business, seeking truth in art-in paint. He would have said, deadly serious!--Art is dangerous! Art is power! Art is truth! But above all he was a story teller. We lived to hear his stories--He was our shaman.

One day we went to his building for a visit, the music was blaring. So we knew he was home. But no response as we yelled endlessly through the door. Finally after a very long wait. He whispered thought the closed door. "I have to tell you something", long pause, "Have you seen The Rocky Horror Picture show?", Well that is it, I am Frankenfurter". He waited for our response. It was met with silence, we had no clue what he was talking about. Slowly the door opened and there he was, dressed as She.

Back then, way back then in the early 80's gays were just starting to come out in number. Trans gender was not a term any of us had heard of. As he related to us, "I thought I was the only one". He soon found a support group and a therapist who lived an open trans gender life. We were there for support along the way, but not everyone in the family was so excepting. I witnessed the strain that put on him. The strain all the years of hiding and lying took.

We started going to Pow Wows because, Shamans were often trans gender. He led us on an intense spiritual journey. He didn't just tip toe out of the closet he danced out to a punk rock sound track! He spoke to students at Harvard and U of M. as a visiting lecture, attended conferences and put on gender based art shows, had poems published and was featured in a few books on the subject.

It has been a long time since then, a marriage and divorce and about 30 years of distance. It helped shape who I am and how I see others, the world and art. Walking that ground, always living just a bit off center, was liberating but also not so easy. But it was right!

My brother-in-laws would talk about his options and struggles: OK, if I get a sex change operation, then I will be a lesbian. I will still be marginalized. Will I lose my job if anyone finds out. What if a cop pulls me over when i am driving "dressed" for a meeting, (the operations were still relatively new at that time), how safe would that be? In the end he did not get an operation.

Fast forward to today, to last Friday, where I met Cupid. I hope his journey was just a little bit easier, 30 years later. I can say from his work and use of humor to tell the story, his story, that there has been progress. I do think there is a lot more knowledge support and openness today, but still there are miles to go. But after meeting Cupid, I know he will live to his full potential, openly honestly and surrounded by people who love him. I might add as an artist, who can tap into the personal in a way that makes it accessible and in a manor that invites empathy--that is powerful!

There you have it, full circle.

tears.
that show was awesome and your words are striking.

Years ago, in that "rural community" Cupid Ojala was my neighbor. He taught me to take a closer look what I was drawing. My artistic abilities have not yet grow to that level...PURE TALENT. It has always been a joy knowing him. (happythinker7@aol.com

Thanks for sharing! Keep working and looking--it will come. Talent is one thing, but it still takes work, lots and lots of work. The important part you already have shown--appreciating someone as awesome as Cupid!