getting back on the horse! 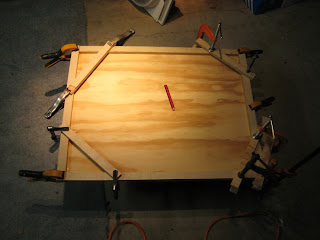 My weekend stared with Mr. Elevin's flight home from NY being delayed for 5 hours. He finally arrived at the airport at 1:30 am. When I found him by the luggage carousel, he was surrounded by a group of people he had befriended along the way. Including a 17 year old African girl on her first trip alone, on her way to College; An Italian Neuroscientist who spoke very little English, yet was still fascinating and very funny; and a fellow who works for the same co. as the Head and lives near us. We drove the Italian to his Hotel and got the girl headed in the right direction, before we arrived home at an un-godly hour.
My weekend ended at 4 am Monday morn, when on the way to drop Mr. Eleven at the airport, we received a call from the airlines that the flight would be delayed 2 hours. Since we were in the car all we could do, the only place open at that hour, near the airport was: The Waffle House! It was my first time at one and all I could think of was a story I heard recently about someone stepping in a human poop, that was under a table, at a Waffle House! We were one of two couples dinning at that hour. It was a trip! The cook and the waitress got into a big shouting match before we had our first sip of coffee. The kitchen in a Waffle House is in the same space as the dinning area so we had front row seats for the fight!
Mr. Eleven has been traveling a lot lately for work. it wouldn't be so bad if the damn flights would run on time. But that is rare these days. It really sucks...but I am trying to spin this in a positive way. I must say, we have met some interesting people. I can now say I went to a Waffle House and survived with no poop on me! I am sure there are more good things I could think of. But the lack of sleep and time it takes to recoup from these 'wonderful' moments the airlines have provided us, make them a bit fuzzy.
Needless to say this week is getting off to a slow start. However, yesterday I kicked some ass! With the help of Jarvis. We set up shop on my driveway. We cut 12 panels for paintings from 4x8 sheets of ply wood and all the side pieces to make cradles for the boards. Some of these will serve as mounts for Hundred Dresses Paintings and some I can paint directly on. It will take a while to get them all glued. But we put in a full day and got a lot done.
Today I work on globes!
Onward!
-So why back on the horse?....well that is a little shout out to my friends who are horse women! One is training a horse. The other is trying to rescue an abused horse and give it a good home. Then there is me who just needs to shut up and get back to work!