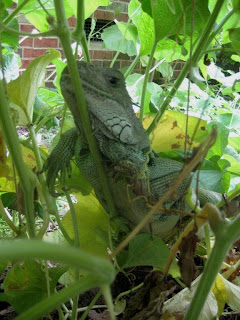 The other day I saw a flutter out of the corner of my eye, as I was trimming some debris from my garden. It was a Tufted Titmouse hanging upside down from a twig, I thought it was hiding from me. I pretended not to notice it. A little later I saw he was still there in the same position. As I got closer he fluttered even more. It was then that I realized he wasn't hiding but was stuck. The twig was actually a blackberry branch covered in thorns. It had a strong hold on his little bird legs. Quickly I grabbed my trusty garden clippers and trimmed the branch and held it still so he could get some traction. I held the 5" length of thorny stick between two fingers, the bird stopped for a moment, looked at me and then shook free, and flew away!

These little moments seem to happen just when you need a reminder of what is important. They seem to wash all the ugly away. Sometimes you need to look twice to see them, but they are there.

*I picked this photo of Truman in the gourd veins, because she often gets so entangled, I have to trim a few veins to get her out...silly lizard!